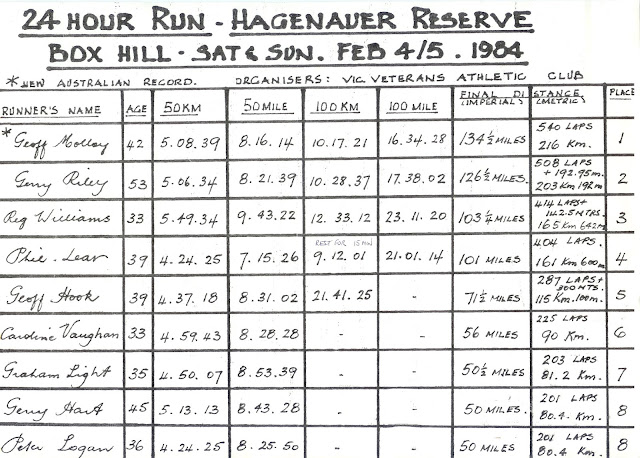 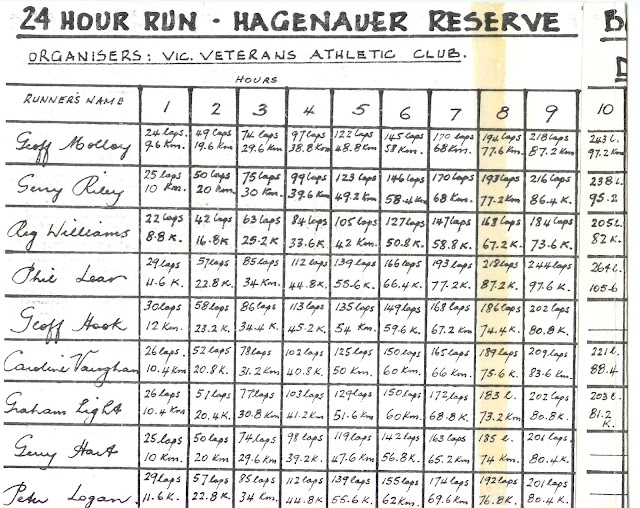 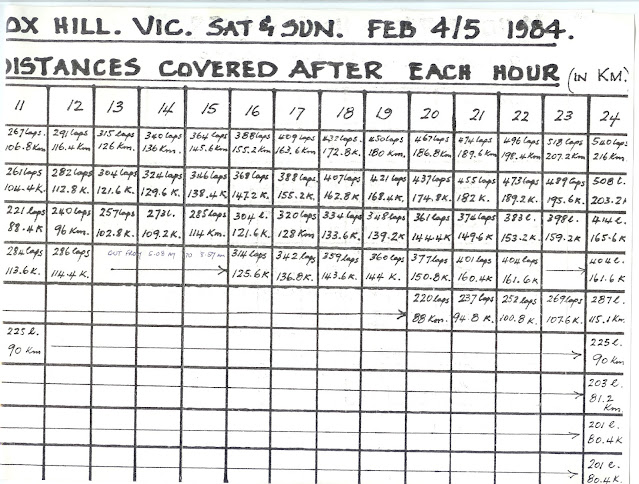 interviewed by Mike Agostini on January 24, 1977

Tom, our readers don't know enough about you. How old are you?

How long have you been running?

I started serious running when I was about 31 or 32.

What were you doing before that?

Nothing—no active sport, 'cos I had asthma, see.

Is that why you took up running?

Yes. I was on tranquillisers then to relax me a bit.

What made you choose running?

Well, this friend of mine who used to play football said, 'You're too small for football' (I did try to play football) 'Why don't you take up running?' Just jog 5 miles a day, he said—but it took me two years to get up to 5 miles! I thought I'd never run 10 miles!

And how many are you doing a day now?

Over Christmas I was running 20 miles a day, 7 days a week.

When did it first become serious with you?

The first club I ever joined, I met a fellow down at Rushcutters Bay; I was doing my 5 miles a day—we didn't know each other, we just used to sort of race secretly against each other, you know! And one day we got talking and he said, 'Why don't you join Eastern Suburbs?' andsaid 'Jeez, I'd love to!' 'cos I was getting interested by then. And he said, 'Oh, by the way, there's a race on Saturday'—this was Thursday! So I said, 'Oh. I'm fit enough for that, I'm running 5 miles a day.'

Anyway, the race was the annual Sydney to Lithgow relay and of course my first run was from Katoomba—and oh boy, that's when I first started training! Nearly killed me! I was wearing Bob Talay's shoes—I never had any proper shoes —and they were much too small. I lost both toenails!

Bob and Terry Magee, I used to idolise them boys.

So let's see, you really started at 29 years of age just working up over two years to 5 miles a day. Yeah, that was just to get off the medical drugs

and the smoking and drinking.

You were smoking and drinking as well? In other words, you were a typical Percy Cerutty case—a man sending himself downhill by his lifestyle.

I was a typical Australian, you could say. But even as a kid I was always keen on sport; Emil Zatopek was a great idol of mine.

Whereabouts in England were you born?

How long did you live there?

Well, my mother was sick so I was put in a Dr. Barnardo's home when I was only two weeks old; then we came out here when I was 13 or 14, with the home that was, and we went to a home at Picton.

But the homes in them days never encouraged sport.     I started running 'cos a prefect said, 'You'd be a good runner' or something, and came 2nd in our school for the mile.

Then in the '56 Olympics they wanted people from different towns to run the sections with the torch and I was doing the best time at that stage—but I missed out for being a bad boy! But I didn't know what athletics was all about then. I never trained, and you've got to really work at it to be a good runner.

Tom, what have you done—besides winning the State 50-mile championship?

I came 7th in the State marathon last year; I was in the St. George winning team.

Do you think you've hit your peak yet?

Are you aiming to be like Jack Foster and compete at top level in your 40's?

I won't be as good as that but I want to keep getting better as I get older. I train different to Jack Foster. I don't believe in speed work all the time. I'm an LSD (long slow distance) man myself; haven't got much natural speed ability but I try to be sensible. I've learnt a lot in the last five years; you never finish learning.

Let's have your height and weight.

I'm about 5ft 9in and usually average about 10% stone—but I think I could get under 10 stone if didn't eat so much! See, I never take running too seriously; I train hard but I'm past the stage where I'm trying to be a world champion. I enjoy the good things in life; I mean I don't go out drinking and smoking but I have a drink now and then, sociable. When we go out to tea I have a red wine, and we went to Tony Vassallo's place the other night and had a beautiful time; great social night.

What is your resting heart rate?

I've never had it tested, never got around to it, though I'd love to go to Perce Russo and have it

done. In England doctors come along to marathon runs and do tests but they seem to be more interested in joggers here.

Before we start talking about your training, what's your present occupation?

And that's something you've just learnt as you went along as well?

Oh yes. I've been everything; coalminer,builder's labourer, sheep and wheat station-hand, dairy farmer—Jack of all trades I am! I was in the film industry too; used to take the newsreels on a bike from Wynyard Picturette to the State Theatre swopping the movies over—that got me fit! I went into hairdressing 'cos I thought it'd be easy so that I could keep up the training—but I made a blue! You're on your feet all the time and it's very tiring.

But I don't sleep more than 6 hours a night; go to bed at 12 (I work in the darkroom evenings) and get up at half past 5, 6 o'clock. Even when I was training for the 50-miler I might go to bed early one night in the week if I'm tired, then I'm right.

Where do you do your training?

On a Sunday I always go up with Ernst Krenkels and we do one long run-24 or 25 miles at about 8-minute pace. Then the rest of the week I usually average about 12 to 14 miles a day, in the morning, depending on how I feel. But about six weeks before a big event I step it up, doing about 14 in the morning and maybe a hard 3 or 4 at night.

Do you have a few days off before competing?

What were your times for the 50-mile?

Any reason for the difference?

thought I'd never run again, but in fact I found that I got very strong after that run, mentally and physically.

/ remember reading that you were hallucinating at one stage.

Well you do, I think. You get to a stage where you know you're going to finish but you've got to get away from it all. This year Lindsay ran a half mile with me sometimes—he was my second —and he said, 'What do you want to talk about?' I said, 'Look, don't talk to me, just be there.'

Actually I'd rather no one to be there, but in a 50-miler you've got to have a second because the runners are so strung out. When I finished in '76 the last bloke came in something like 2 hours after me!

Is that the longest race you've ever run?

Do you plan to do a 100-miler eventually?

I'm building up to it, yeah. A fellow asked me to do a 24-hour run but I said no. When it comes it comes. Takes years to build up. The VMC are talking about a 100km next year and I'm going in that. I'm still developing; I'm not fully extended yet.

Tom, obviously you've had your injuries but you ignore them generally, don't you.

Oh, who doesn't! I'm still like most runners, don't do enough stretching exercises and abuse the experts by not taking their advice.

What about diet? What do you normally eat?

Well, when I'm training for the 50-mile I think your stomach sort of calls out for food. If I'm back early enough I'll have porridge for breakfast. You never eat before a run?

No never; even before the 50-mile I won't eat; just might have some honey, something like that. Milk and sugar with the porridge?

Honey usually, but I never drink milk. I like it but it makes me sick.

Not a great deal; not enough in fact. For lunch I'll have sandwiches or potato rolls. I'm a funny eater; might live on potato rolls for a week! Tea'smy biggest meal—plenty of vegetables; and a couple of times a week I buy one of them big apple pies and I'll eat all that too!

Do you play any instruments?

No, I'd love to play the piano. I've still got that to come yet!

So as you go along, you're developing the older you get.

Yeah. As a kid I never had much, so I think I'm still growing. Like the photography; I always wanted to when I was a kid but I didn't start till I was about 30.

Of course I was an alcoholic; used to drink bottles of rum at 14 or 15, play up quite a bit. You don't have any family in Australia then? No; I've never seen my mother or my father. think that's maybe why I'm sort of a funny fellow. I've got no ties; just a loner. I think you could say quite a lot of runners are anti-social, doing their own thing.

That's right, Mike. When I first started I used to like to be there to win that trophy; even if it was a team event I wanted to be in the winning team. But now I don't. I never got a trophy for the 50-miler. The thing for me was I won it, I organised it, I put the thing together, and that pleased me and I was pleased to see so many people finish, but I wanted to give them something.

We spent a lot of money on that race and a lot of it come out of my own pocket. Four hundred dollars it cost us all told, and I put about $150 or $200 into it. We gave them all singlets—this is where we made a mistake. When we started we said, no one's to run it unless they've run a marathon and when they read there was a singlet involved they were happy. It only cost them $2.50 and singlets are near $4! Next time everyone that finishes gets a singlet; 3rd of October it is, the holiday weekend. And they all got a medallion; same as the City-to-Surf type, not those cheap ones you get at State Championships.

Start from the Town Hall and goes to Stanwell Tops near Helensburgh—last year, that is. It's 30 miles 500 metres to there, then you turn round and finish at Sylvania Waters track.

A marathon must be easy for you now!

Not easy, no! I went in the Canberra one and boy, that was hard; 2.56 I did. No, nothing's easy, Mike—you know that yourself. Some days it's easy and some days it's hard. They're different races, you know. In the 50 I ran better halfway than I did in the Canberra marathon; a bit under 2.56 I was, and it was a lot hillier.

You must be looking forward to turning 40 when you can run in the veterans.

That's what I'm really looking forward to. A lot of runners give it up; they say, 'What's the use?', but not me. I've built my way up from being nothing when I started and now I'm at the stage where I'm in between and I just want to keep it going.

What do you think distance running of the kind that you do needs in Australia most of all?

It needs promotion; and I think there's too much red tape. That 50-miler we put on there was no officialism; it was a friendly, basic thing—and that's what athletics should be. 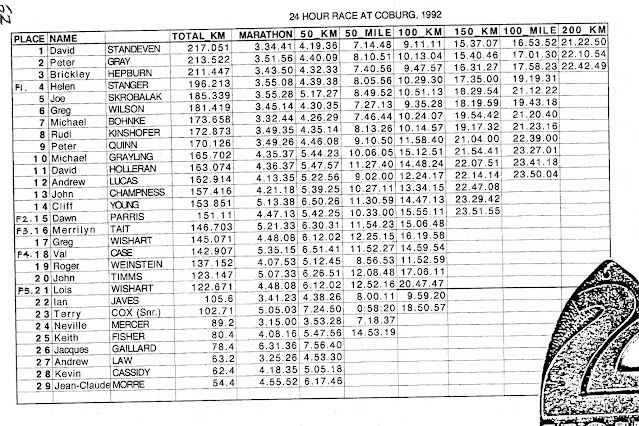 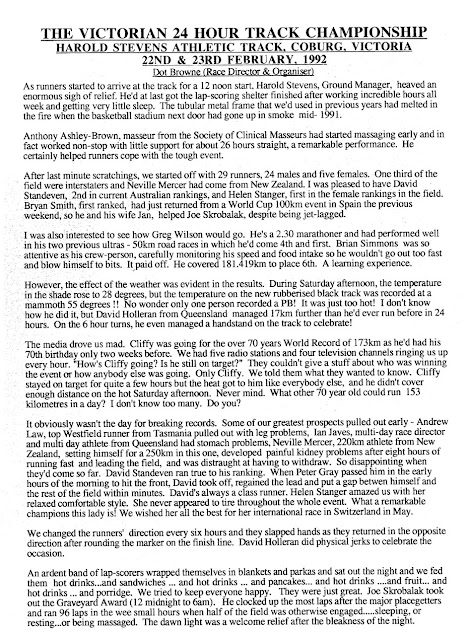 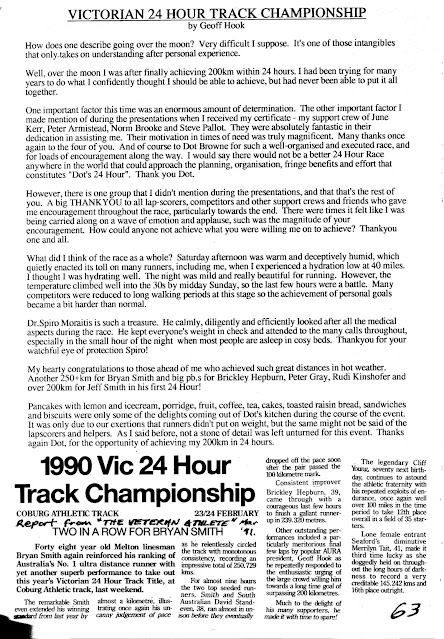 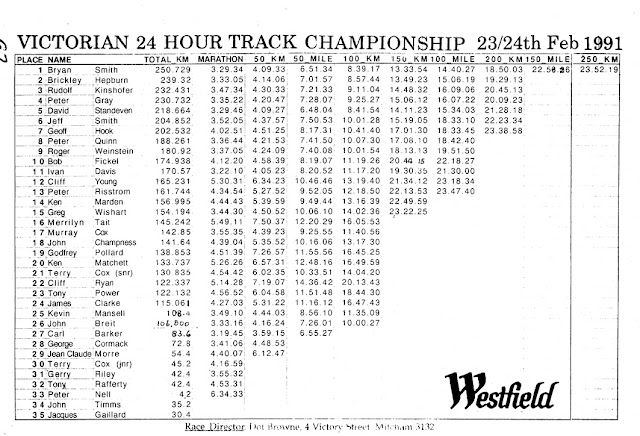 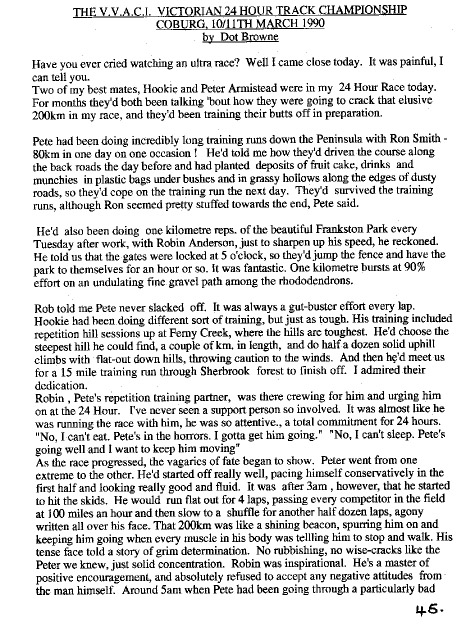 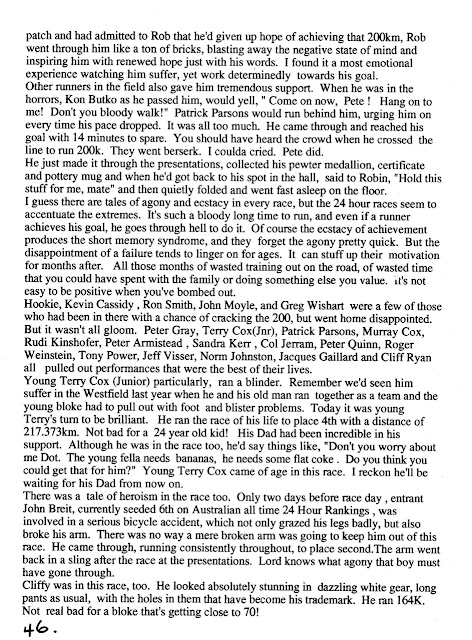 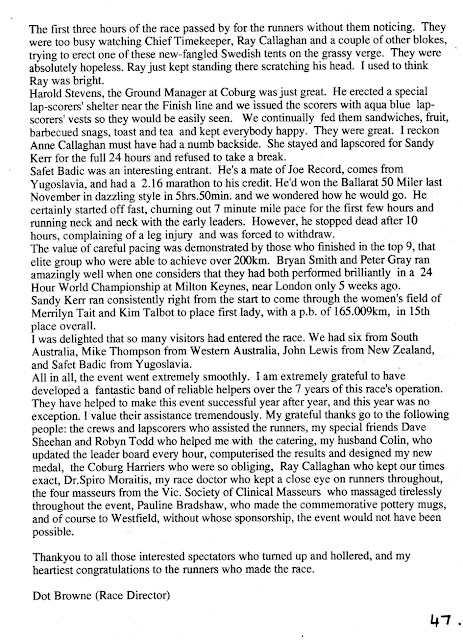 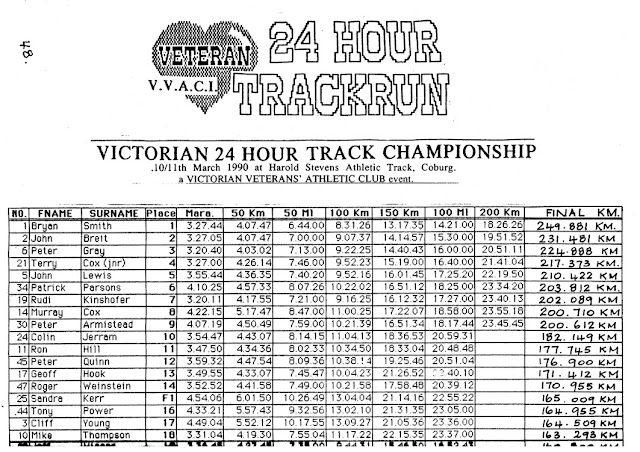 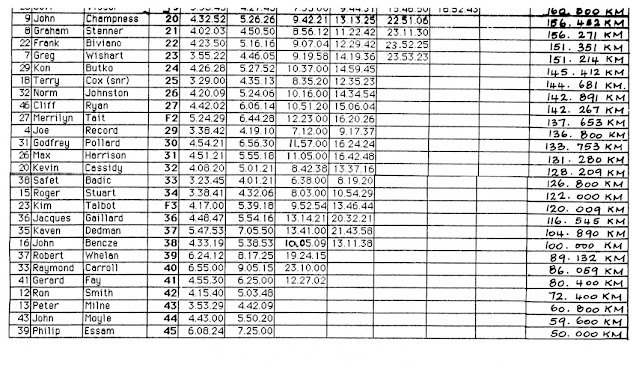 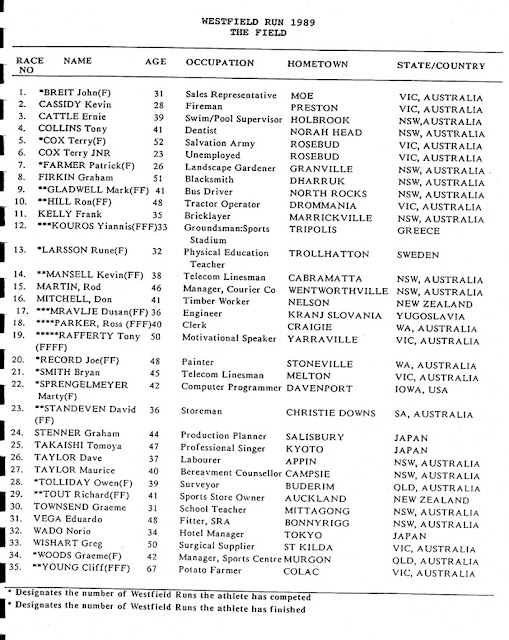 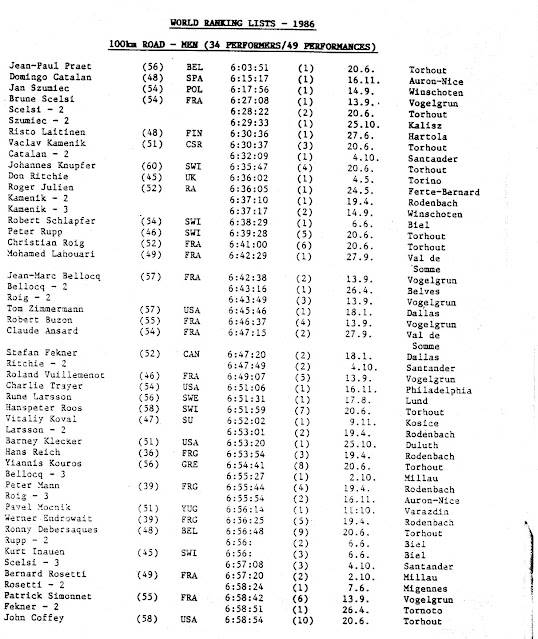 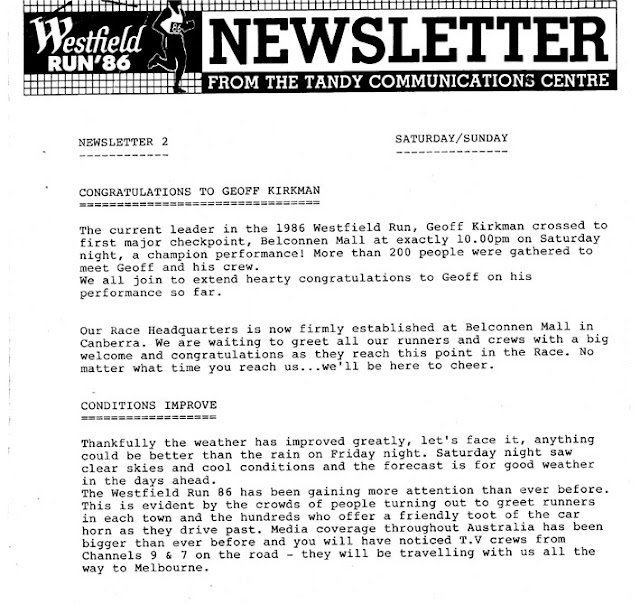 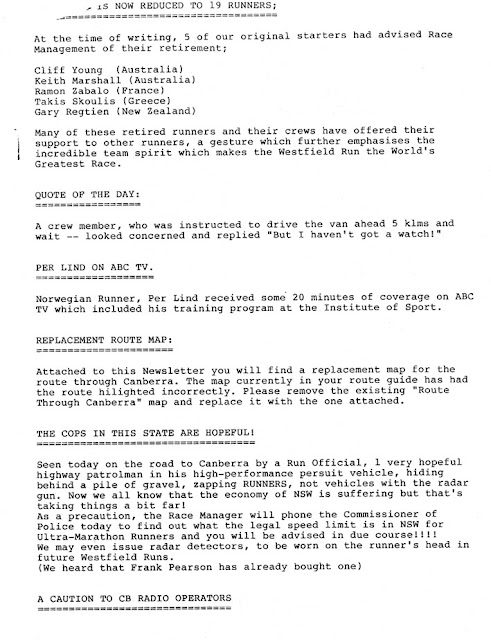 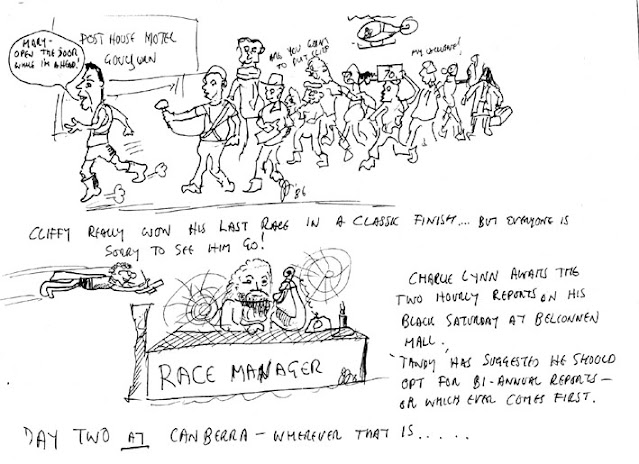 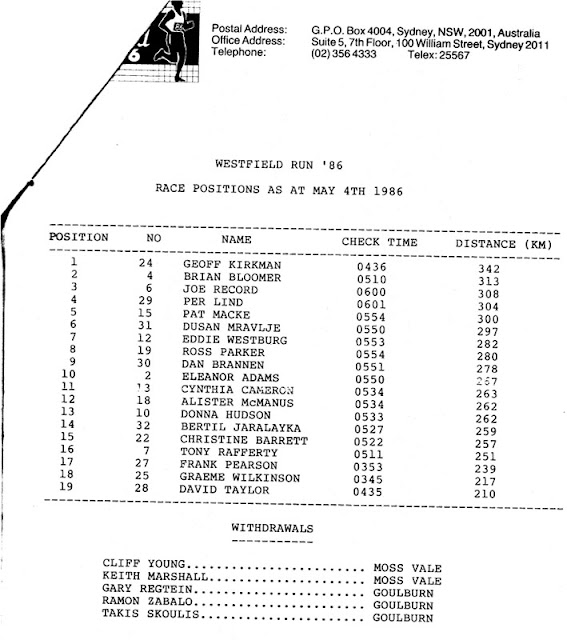 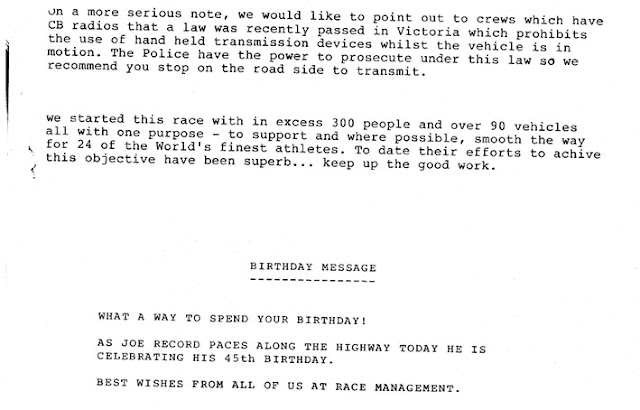